Know Your Rights when dealing with ICE

What should I do if ICE agents approach me on the street or in public?

When ICE agents arrest someone in public, it typically happens quickly. They may call your name out loud and ask you to confirm your name and then detain you.

•Before you say your name or anything else, ask, “AM I FREE TO GO?”

• If they say YES: Say, “I don’t want to answer your questions” or “I’d rather not speak with you right now.”  Walk away.

• If they say NO: Use your right to remain silent! Say, “I want to use my right not to answer questions” and then “I want to speak to a lawyer.”

• If ICE starts to search inside your pockets or belongings, say, “I do not consent to a search.”

•Don’t answer questions about your immigration status or where you were born. They will use any information you provide against you. Do not hand over any foreign documents such as a passport, consular IDs, or expired visas.

• If you are in Criminal Court for a court date, ask to speak to your defender before they take you away.If officers come to my home, will I know they are from ICE? Not always! Beware: ICE agents often pretend to be police and say they want to talk to you about identity theft or an ongoing investigation.

Can ICE agents enter my home to arrest me?

If ICE agents do not have a warrant signed by a judge, they cannot enter the home without permission from an adult. Opening the door when they knock does not give them permission to enter your home.

So, what do I do if officers are at my door?

• Find out if they are from DHS or ICE.

• Politely ask to see a warrant signed by a judge and to slip it under the door. If they don’t have one, decline to let them in.

• If they are looking for someone else, ask them to leave contact information. You don’t have to tell them
where to find the person and you should not lie.

What can I do if ICE is inside my home to make an arrest?

•Tell them if there are children or other vulnerable residents at home.

•Ask them to step outside unless they have a warrant signed by a judge.

• If they came inside without your permission, tell them “I do not consent to you being in my home. Please leave.”

• If they start to search rooms or items in your home, tell them “I do not consent to your search.”

• If ICE is arresting you, tell them if you have medical issues or need to arrange for childcare.

What are my rights if I am being arrested by ICE?

•DO NOT LIE. It can only hurt you in the future.

•You do NOT have to share any information about where you were born, what your immigration status is, or your criminal record. Ask to speak to a lawyer instead of answering questions.

•You do NOT have to give them your consular documents or passport unless they have a warrant from a
judge. 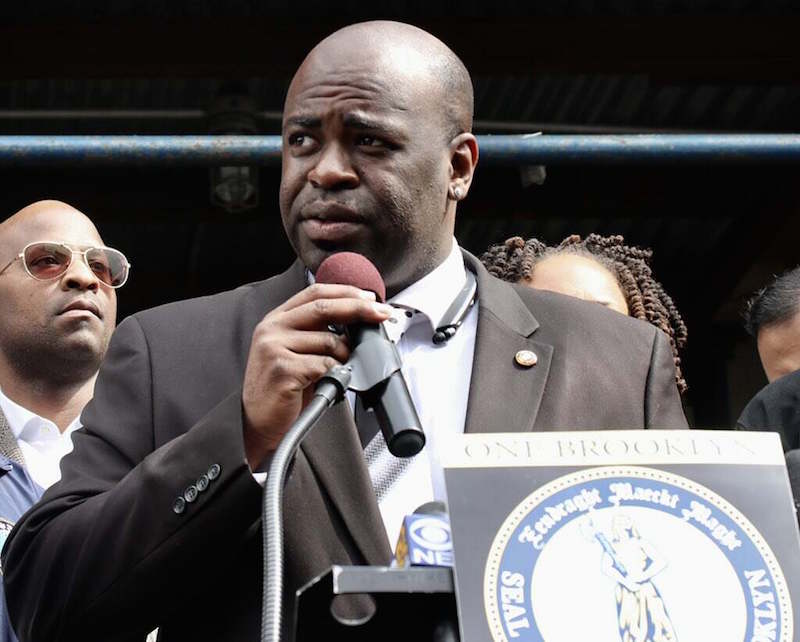 Housing Is A Human Right: Anthony Beckford has always been an advocate for tenants and homeowners.  He has taken on the #1 Worst Landlord of New York City, Jason Korn, and will continue to fight against crooked slumlords and greedy developers on behalf of community members in the district and throughout New York City. He helped to advocate for the progressive NYS Tenant Laws that recently passed in Albany. He plans to release his Housing Justice Plan within his first 30 days in office. His plan includes 40% Rent Rollbacks, turn shelters into permanent housing, Moratorium on Rezonings, Reform the ULURP Process, Land Use decisions based on community input, implement a vacancy tax on landlords who try to warehouse their available units (which includes storefronts as well), increase Fep Voucher amounts, rollback of property tax for homeowners to reflect the purchase price of their home and not the market price due to newly built towers, prosecution and property seizures of corrupt landlords, tenant protection unit in each council district, AMI to be calculated based on per zipcode, building of 100% Affordable Low Income housing, penalize banks for racially bias redlining and predatory lending, Fully Fund and Fix NYCHA, provide a pathway to home ownership along with providing Tenants with the option to purchase their apartments, get rid of MCIs, put an end to deed theft, protect home owners from foreclosure and much more. Beckford will also make sure that he advocates for parts of the community that seek to be landmarked. Anthony supports the need to create supportive housing for persons with disabilities.  *Anthony Beckford is also the only candidate that does not take REBNY money and has taken the #HomesGuarantee Pledge and the only candidate that supports Expanding Right To Counsel. Anthony Beckford also stated the following, "During this pandemic we must Cancel Rent and Mortgages. We must protect not only tenants living in apartments, but also commercial tenants and homeowners who are tenants to their banks. The cancellation must be implemented for a year and go back retroactively to February 2020. Upon the year timeline, if this pandemic persists, then the cancellation must be renewed. Homeowners who are small landlords, must also be given access to a grant that they can use to pay their property taxes and water bills. Corporate landlords must be exempted by using a guideline that allows anyone with less than 18 units to be able to have access and approval to the grants."

Education: Anthony Beckford will push for the release of the over $1.4 Billion owed to New York City Public Schools.  Anthony has advocated for more social workers in schools, pay increases for Teachers, Mentorship Groups and Vocational training in schools, Free Afterschool Programs, Free Childcare, creation of Financial Literacy courses, as well as a year round K to 12 curriculum of Black History Education. Anthony Beckford will introduce his #CUNYforAll initiative which aligns with the demands of the #FreeCUNY movement. This will not only expand the CUNY ASAP program, but will make CUNY Free for all New York Residents. Anthony will work to not only make CUNY tuition free under his #CUNYforAll initiative for all New Yorkers, but his plan also includes free monthly metrocards, monthly food stipends and free books for students. Adjuncts must also be able to receive the $7,000 per course that they have been demanded for some time now. *Anthony supports the "New Deal For CUNY" initiative by Cuny Rising.

Climate Justice: Anthony Beckford aims to push for more community gardens and rooftop gardens. He has been an avid supporter of green spaces and eco-justice. Beckford is a supporter of the #GreenNewDeal and is the only candidate to take the #NoFossilFuelMoney and the #GreenNewDeal pledges. Beckford believes that we must have clean renewable energy. Anthony has also been an advocate for rooftop gardens which will help provide cleaner air and reduce utility costs. Also, calls for there to be Public Power.

Healthcare: Anthony Beckford believes that their must be #SafeStaffing to provide an safer patient to nurse ratio in all hospitals and healthcare facilities. Beckford has been an advocate in regards to ending the high mortality rates in our hospitals and is pushing for all New Yorkers to be able to have affordable healthcare and lower prescription costs. Beckford also believes that when it comes to patient care, that there must be a focus on Patients over Profits, which is why he is the only candidate to take the #PatientsOverProfits pledge. Anthony is ready to release his Comprehensive Care Plan which will address the lack of access to care and the Black Maternal Mortality Rate. Anthony Beckford also believes that medical coverage should be affordable and adequate for everyone, which is why he supports the New York Health Act.

Police and Criminal Justice Reform: Anthony Beckford advocated for the original 911 Anti-Discrimination Bill, that would have held people such as Amy Cooper accountable for calling 911 against a person based on a racist agenda. Anthony has always been vocal for the redistribution of NYPD funds that be used to provide funding for youth and senior programs, education, mental health services and to hire more counselors for our schools, even before there was a national call. Anthony will introduce legislation for a portion of the civil suits to be taken from the pension of officers, the denial of any paid leave for officers under investigation for brutality and the murder of unarmed people, any officer that is charged with a felony to automatically lose their pension, provide Mayoral and City Council Control over the firing of Officers, implementation of the Elected Civilian Review Board and much more. Anthony has been advocating for the Repeal of the "Walking While Trans Ban", the closure of Rikers without expanding mass incarceration with the building 4 new jails, and the end to solitary confinement. "I will put an end to the building of thr 4 new jails that my opponent voted for and use those capital funds to build affordable low income housing for New Yorkers." - Anthony Beckford / Anthony is also the President of Black Lives Matter Brooklyn and the President of the Brooklyn Chapter of Copwatch Patrol Unit.

Animal Rights: Anthony Beckford supports the push to end classroom incubation projects, cease the slaughter of animals in live animal markets, banning wildlife-killing contests, ban commercial sale of cats, dogs, and rabbits by pet shops and ban the sale and manufacturing of new fur apparel. I also look forward to banning horse carriages in New York and will promote the adoption of companion animals as I have done.

Tax The Rich: Anthony Beckford is committed to making the billionaires and millionaires pay their fare share of taxes. There are about 119 billionaires in New York with a combined wealth of over $600 Billion. There are 979,000 high maintenance millionaires who make $1.5 million to $29 million a year. 8,800 ultra high maintenance millionaires who make $29 Million and up. The combined wealth reaches past $4.759 Trillion a year. Anthony will seek to push the state and city to implement a 5% to 10.5% Equity Tax on that combined wealth to bring in more than $287 Billion a year in revenue for New York to full fund services and programs that we need. Anthony also supports Assemblywoman Yuh Lin's legislation to implement a "Stock Buy Back Tax" and other pieces of legislation that will create another possible $13 Billion in revenue.

Small Business: Anthony is a strong business for small businesses. He has been vocal and consistent in his support of the Small Business Job Survival Act (SBJSA).  Anthony believes that in order to create economical growth, that we must protect our small businesses and their employees. Anthony Beckford is ready to reintroduce the SBJSA and get it passed once he is elected the new City Council Member of the 45th District. In regards to.our small businesses that have been closing due to Covid, Anthony will work to make sure that the businesses are provided city, state and federal relief so that they do not permanently shut their doors.

Public Safety: New Yorkers must feel safe in their communities and in their homes. In order to do this, we must implement a community mentorship program for our youth, provide mental health services and be able to rid our communities of poverty. Poverty is one of thr leading causes to crime, due to the various hardships and disparities it causes. Once we fully fund our schools, community programs and provide more job and economical growth, we will see a drastic decrease in crime.

Questions regarding any other issues can be directed to [email protected]