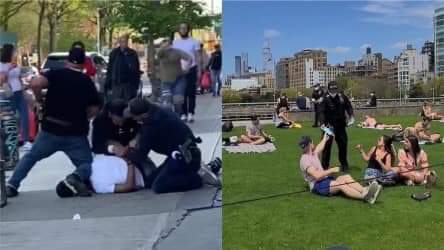 "I have spoken out against and have been on the frontlines against police violence and unjust police tactics before this pandemic, and I am consistently doing so during the pandemic.  All of this while my opponent and others, still supports and receives support from the racist PBA and SBA and only gives empty political rhetoric for optics, after many of us placed pressure on elected officials. This past weekend of violence against Black community members, is evidence of the continued racial bias policing of Black communities that exists in New York City. Many politicians have failed to bring about accountability, allowing NYPD officers to feel as if they can get away with their targeted abuse of power. This is definitely a tale of two cities, especially during this pandemic, where in a crowded park white New Yorkers who are not practicing social distancing and not wearing a mask are left alone and given masks by the NYPD. They received no warnings or summons. Then you look in the Black community where community members are brutalized, given summons and arrested. They are jumped on, have knees placed on their backs and necks, punched in the face, pepper sprayed, tackled to the ground and much more. Mayor De'Blasio, Police Commissioner Shea and many members of the New York City Council have failed our communities. Many of them have stayed silent and turned a blind eye. Many of them accept campaign donations and endorsements from the racist PBA and SBA, that celebrates police violence against our communities and issue watered down statements and provide no actual accountability. The same organizations that mocked the murders of Eric Garner, Delrawn Smalls and many more by NYPD Officers. The presidents of these organizations have even called our Black youth 'mutts'. We need to start bringing their officers under control. The community will not tolerate this any further. Officers who commit these human rights violations, need to be fired, charged, indicted and sentenced. No ifs, ands or buts about it. I am calling on all District Attorneys to fully prosecute all officers involved in these recent brutality incidents. I am calling for there to be no recommendations of community service or house arrest. They must receive jail time for their crimes. I am calling on NYC Comptroller Scott Stringer to settle all civil cases of police brutality immediately. This is not the time for political rhetoric. It is the time for action."

* Anthony Beckford is a U.S. Marine Corps Veteran, Community Leader, President of the Brooklyn Chapter of Copwatch Patrol Unit, the President of Black Lives Matter Brooklyn, Founder of Save Our Youth Initiative, Founder of Clergies against Police Violence and Injustice and City Council Candidate for the 45th District in Brooklyn.